Happy Birthday to Carles Puyol, captain of 21 trophies in 15 seasons with Barcelona 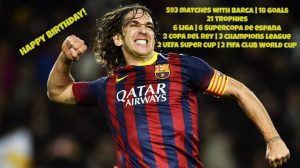 Carles Puyol, captain, the most representative player of FC Barcelona.

He has the record of trophies won with Barca.

He played all his career with the “Blaugrana“, 19 years in total, 4 years with the young team and 15 years with the senior team.
In total, he played 593 matches scoring 18 goals. He won 21 trophies: 6 Liga, 6 Supercopa de España, 2 Copa del Rey, 3 Champions League, 2 UEFA Super Cup and 2 FIFA Club World Cup.

With the Spain National Team he played 100 times, scoring 3 goals.
The most important goal was scored against Germany in the semi-final played in Durban in the 2010 FIFA World Cup
With Spain won the 2010 FIFA World Cup in the final against Holland.
He won the UEFA Euro 2008 in Austria- Switzerland, becoming a legend in the national team too.