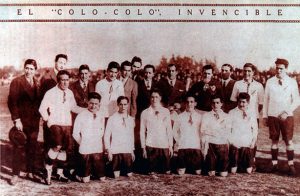 In his first year of life, in official and friendly matches, Colo-Colo played 22 matches, with 20 victories and 2 draws, earned the nickname of “invincible”.

One of the most important player was David Arellano, and today the stadium is called with his name.

Colo-Colo is the most successful club of Chilean football. They won 31 Primera Division, 11 Copa Chile.