Vujadin Boškov, the Manager of the “Sampdoria’s Miracle” 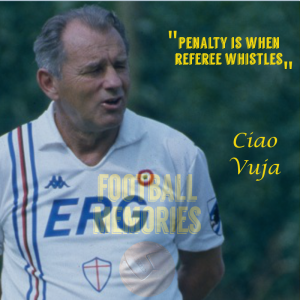 Vujadin Boškov, the Manager of the Scudetto of Sampdoria

He played also for Yugoslavia and he won the silver medal at the 1952 Olympic football tournament and he played at the 1954 and 1958 FIFA World Cups.

He was a brillant Manager. He started as a technical director in FK Vojvodina and manage to win a Yugoslav First League. After this he was the coach of the Yugoslavian national team and manager in the Netherlands (winning a KNVB Cup with ADO Den Haag, Spain (winning with Real Madrid a Liga and a Copa del Rey) and in Italy, when he is still celebrated as the “Manager” of the miracle Sampdoria, something like the actual Leicester.

During his career he won:
FK Vojvodina
Yugoslav First League: 1965–66