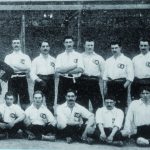 Fifa is not recognising this match because FIFA was founded on 21 May 1904.

The incident-packed game had taken place at the Stade du Vivier d’Oie (“Goose Pond Stadium”) in Uccle, Belgium and it ended in a 3–3 draw. As the encounter ended undecided (and no extra time was foreseen) the Évence Coppée Trophy that would be handed out to the winner was logically not awarded.

From the original comments from France, the tactics were described: “France plays in a classical 2-3-5 formation: two backs, the two half-wingers (G. Bilot and especially C. Bilot) are defensive and hold the opponent’s wingers, Davy is half-center. Finally there are the five forwards. The ‘exteriors’ (not named wingers yet) Mesnier and Filez who make a break, the ‘interiors’ are Royet (who is relay runner) and Cyprès and the powerful center (Garnier), who is also the playmaker.”