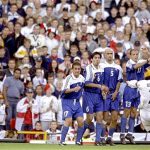 Do you remember the Beckham’s free kick against Greece?

It’s 6 October 2001, England must to draw or win against Greece to qualify for the 2002 World Cup in Japan and South Korea.

It’s minute 93′ and Greece is winning 1-2 at Old Trafford and a free-kick was given to England from 30 yards.

Sheringham and Beckham went to the ball. The captain of England wants to kick.

Beckham started the free-kick out to the right and it dipped suddenly to the left, beating the wall and the keeper.

The rest of the story is history. The Beckham’s free-kick against Greece shocked the world.

All the Stadium and all England went crazy. The Beckham’s free-kick against Greece sent England directly to the final stage of the 2002 World Cup in the far east.