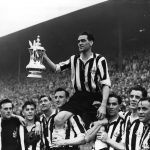 On 3 May 1952, Newcastle becomes for the second time the FA Cup champions, beating 1-0 Arsenal in the Final.

Before a crowd of 100,000 people at Wembley, Arsenal had to play from the minute 35th with 10 men as Wally Barnes suffered a knee injury.

Arsenal was unlucky with injuries, and Newcastle deserve to win 1952 FA Cup

Newcastle took advantage of this and scored at minute 84th from the Chilean star George Robledo.

Actual Football Fact: This year 2017, Newcastle played in Championship but they came back to the Premier League.