Who is Ivan Savvidis, the PAOK president with gun [VIDEO]

Ivan Ignatyevich Savvidis, president of PAOK Thessaloniki, is the man carrying gun to protest for a disallowed goal. With his bodyguards, he went to the pitch after the disallowed goal against AEK. The images show him carrying the gun.

Who is Ivan Savvidis?

Savvidis born in 1959 in Santa, Georgia. He has the double citizenship, Greek and Russian. Before becoming president of PAOK, he was president of Rostov, SKA Rostov and Viktor Ponedelnik. Politician and businessman, he is one of the richest man in Russia. He was in the Duma and friend of Vladimir Putin. He is married and has two childs, and is considered the most influent man in Thessaloniki.

The PAOK president carrying gun past

The PAOK president carrying gun was a soldier in he Red Army, worked in a Tobacco factory before became graduated in Economical Science. We was the CEO of Donskoy Tabak. From 2002, he is also the president of the “AgrokomGroup”, founded in 2004. 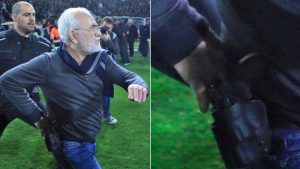 He has business in different industries, logistical companies and food companies. He is owner of two resorts (Makedonia Palace and enia Palliuri), one communication company and the harbor of the city. He has also in the beneficence with a Fondation (Fondation Ivan Savvidis).